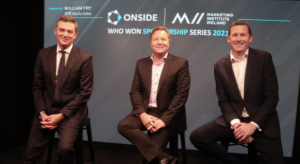 In a breakthrough summer for women’s sport in Ireland, Olympic gold medallist Kellie Harrington has been named Ireland’s most marketable athlete by sponsorship consultants ONSIDE and the Marketing Institute of Ireland at a major business of sponsorship conference this week.

In a further sign of the marketing industry’s growing enthusiasm for women’s sport, the LGFA’s partnership with Lidl was voted the joint winner of the best overall sports sponsorship of summer 2021 alongside FBD’s tie-up with Team Ireland around the Tokyo Olympic Games.

ONSIDE Founder and Chief Executive, John Trainor, noted that: “For several years, momentum has been building around women’s sport in Ireland with the likes of Katie Taylor and the women’s hockey team blazing a trail. What we’ve seen for the first time in 2021 is female athletes dominate the news agenda for a sustained period, from Rachael Blackmore’s ground-breaking successes at Cheltenham and Aintree in March and April, through to Leona Maguire’s inspirational performances at the Inverness Club in September.”

Trainor continued: “In the middle of all that were the Olympic and Paralympic Games and, again, it was the female stars that shone brightest, and Kellie Harrington’s boxing gold medal has catapulted her to the top of the most marketable athletes in the minds of key marketing budget holders for 2022”.

“It was also notable that Allianz’s use of Ellen Keane – a regular fixture near the top of our list over recent years – as the face of its Paralympics marketing in Ireland helped the brand finish joint winner of the most effective Paralympic sponsorship alongside Toyota.”

Away from sport, Pieta House’s partnership with Electric Ireland was an overwhelming winner of the best non-sport sponsorship in summer 2021. At a time when the majority of consumers (82%) wanted to see the commercial sector support local causes, this sponsorship impacted positively on the partners and wider society.

David Field, Chief Executive of the Marketing Institute of Ireland said: “This is the 6th year that we have partnered with ONSIDE for this event, which I believe reinforces the role that sponsorship plays in the overall marketing mix. We have seen sponsorship evolve during the pandemic, in many cases to the benefit of society. We have also seen what a resilient part of the marketing mix it continues to be. Many of the most effective sponsorships in the eyes of Ireland’s marketing industry were in place pre-pandemic and remained in place over the last 18 months. This has seen brands and rights holders maintain relationships during tough times and they are now seeing the benefits of the sponsorship which is ultimately long-term brand building. I believe sponsorship will continue to be a meaningful and very commercial key for unlocking business success and brand growth.”

In a summer of sport dominated by the Olympic and Paralympic Games in Tokyo and men’s Euros, Coca-Cola was the only brand to feature near the top of the list of effective sponsors for all three events.

John Seiler, Head of Sports and Gaming for Coca Cola said: “Sponsorship of major events remains a really effective way of reaching large audiences when it is aligned and executed well. Our approaches for the Olympic Games, Paralympic Games and Euros this summer were all quite different and it’s fantastic to see the impact of our work across all three events recognised by industry professionals in Ireland.”