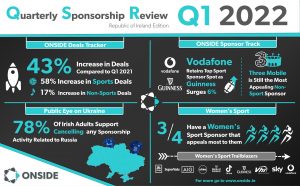 The volume of sponsorship deals reported in Ireland in Q1 2022 increased at its fastest rate in 7 years to grow by 43% on the same period last year, while 3 in 4 Irish adults currently have a sponsor specifically of women’s sport in Ireland that appeals most to them, according to new research by sponsorship advisors ONSIDE.

As sports returned with major live crowds and TV audiences last quarter, including a peak of over 1 million tuning into Ireland’s Guinness 6 Nations win over England on RTE, the latest ONSIDE Quarterly Sponsorship Review (ONSIDE QSR 1-22) shows that sport continues to be the preferred choice of deal makers in sponsorship in Ireland, with an increase of 58% on deals tracked so far in 2022 found in the sports arena. GAA rights holders drove the largest share of this growth, making up nearly 1 in 2 deals reported, fueled in part by the introduction of sleeve sponsor opportunities. Soccer and athletics proved the other most active deal doing platforms in the first quarter.

Commenting on sponsorship market dynamics at play so far this year, John Trainor, Founder and CEO of ONSIDE notes that “2022 has opened with an exceptionally bright start to the sponsorship year with a mix of high-profile major ‘glocal’ deals by new players on the block including Horizon Therapeutics naming right of the Irish Open golf, Shane Lowry’s pairing with Irish tech unicorn Wayflyer and TikTok with 6 Nations Rugby.  These were mirrored in GAA circles by groundbreaking new arrangements with international players including Westerwood Global (Galway Camogie) and Fiserv (Tipperary GAA), reflecting the changing face of sponsor brands entering the game this year.”

Six Nations 2022 Triple Crown winning Ireland team main sponsors Vodafone have again topped the league of Ireland’s most appealing sports sponsors in the minds and hearts of the Irish adult public for the 3rd quarter in a row, with tournament sponsors Guinness rising above Lidl in the Top 3 stand out sports sponsors. Other sponsors that appealed most to the public in Q1-22 included principally Irish Rugby national and provincial backers including Aldi, Aviva, Bank of Ireland, and Heineken.

With live entertainment also back in play, 3 Mobile’s long-term music and venue naming rights strategy around the 3Arena, and more recently The 3 Olympia, sees the brand top the charts of most appealing non-sports partners in Ireland. Relatedly, the latest ONSIDE research found that 71% of Irish adults agree with 3 Mobile’s decision to temporarily suspend their sponsorship of Premier League Chelsea Football Club in light of the UK government sanctions on any sports organisations with any connections to the Russian government.

Certifying the fact that 9 in 10 sponsors see women’s sport as an opportunity for their business in the next 1-3 years, 1 in 5 deals reported in Q1 were women’s sports related sponsorships. Trainor noted that “despite ongoing debate around the issue of low visibility of women’s sport in terms of media coverage versus men’s sport, a very significant 8 in 10 Irish males and 3 in 4 females already have a sponsor in mind that they feel is increasing the profile and public’s interest of women’s sports in Ireland”.  Retailers Lidl (LGFA), Aldi (IRFU), and SuperValu (GAA), plus Sky Ireland (FAI), Vodafone and Bank of Ireland (Rugby) surfaced in the latest ONSIDE research as trailblazers in promoting women’s sport to date.

Looking to the rest of the year ahead, Trainor concludes: “Fans are responding to increased coverage and audiences reached via women’s tournaments, and new Assets including the Women’s Irish Open and other carve outs by major sports rights holders of the women’s side of their sport will unlock fresh opportunities for revenue growth for the sponsorship market into the medium term. Broadcasters, including RTE and TG4, are playing into an underserved content sweet spot that will be massive, while female C-Suite leaders that influence where marketing investment is spent are increasingly ‘buying women’s sport’ as a way of growing their businesses and will buy onto these platforms as the business case of women’s sport is built out further and proves it is here to stay and grow”.