For fourteen years, The All Ireland Marketing Awards programme from The Marketing Institute of Ireland has recognised the success of Irish marketing professionals and the impact they drive for their organisations and collectively for the economy of our island. We believe recognition has never been more important than it is today. Continuing to establish and celebrate the benchmark for what great work looks to inspire and drive our industry onwards is crucial as we all navigate unprecedented times.

Join us at 3pm on October 16th for the biggest moment in the Irish marketing calendar, as we celebrate success within our community. 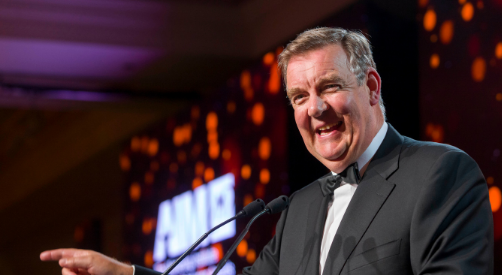 Bryan is an Irish journalist, newscaster and presenter with RTÉ in Ireland. He currently presents Morning Ireland. He previously presented RTÉ News: Six One, RTÉ News: Nine O’Clock and occasionally RTÉ News: One O’Clock. He attended a media course in the Rathmines College of Commerce, Dublin Institute of Technology.Dobson previously worked for the Dublin pirate station Radio Nova, hosting their nightly Dublin Today programme. Before joining RTÉ in 1987, he worked for BBC Northern Ireland. Dobson joined RTÉ News and Current Affairs as a reporter in 1992. Before being the main RTÉ News: Nine O’Clock presenter, he was the RTÉ Business Correspondent. In September 1996, he was named as the co-presenter of the flagship early evening news programme, RTÉ News: Six One on RTÉ One, one of the most watched news programmes in Ireland. Since then he has presented that news programme, currently with Sharon Ní Bheoláin. He left his position as co-presenter on 25 October 2017 after 21 years to move to early morning radio on Morning Ireland. He also presents various special programmes such as RTÉ’s coverage of general elections. In May 2011, he fronted RTÉ television coverage of Queen Elizabeth II’s visit to the Republic of Ireland.