The Covid19 pandemic has been a very grim reminder of the delicate balance that exists between a brands positioning and the context in which that positioning needs to be communicated. The Conscious Consumer project set out to take a broad look at Irish consumers to understand the influences on consumers and how they impact purchasing decisions in 2020. The fieldwork for the research happened before the Covid19 lockdown, but in analysing the research, we are confident that the insights uncovered by this project remain valid. At a minimum, understanding how consumers were thinking and feeling heading into the lockdown can help inform how they behave both during the lockdown and how they might behave during an exit.

Today, consumers are more informed, more aware and more discerning when it comes to how they think about their purchasing and consumption. Not only are they increasingly changing behaviour for health and environmental impact reasons, but everything from gender equality and new product alternatives are changing how they behave and what they buy. Too often we consider only a slim vertical of context that is directly related to a brands category context. This work provides an opportunity to consider the broader context of Irish consumerism.

What is concerning Irish consumers?

Electric scooters, vaping and even worries about gun control are now influencing our choices in Ireland, but the three main concerns identified by this project were health, poverty and climate change.

It is highly likely that as we begin an exit from the lockdown phase of this pandemic and begin to consider the new reality, these three issues are most likely to remain, but with a different ranking. Heading into 2020, Irish consumers were not that optimistic, with ESRI forecasting a 3.3% growth in GDP in its December 2019 macro-economic publication (significantly lower than previous years) and the KBC Consumer sentiment index indicating a cautious outlook. 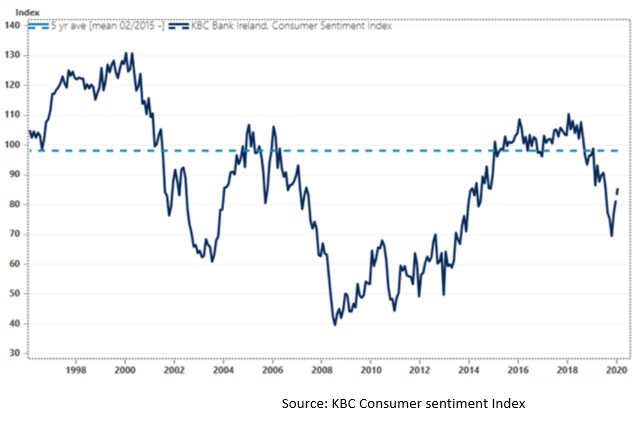 51% of 15-64 years olds in Ireland felt that health (including mental health) was their biggest concern. From the cervical checks crisis to the ongoing hospital overcrowding and bed shortages, to not enough consultants and GP’s in the system, this was not a surprise and certainly concerns over health care provision in Ireland was a significant catalyst in the February election outcome. For brands operating in the health sector this void provides opportunity and MedTech is growing as a result. 2019 saw the MedTech sector’s growth outpacing the broader life sciences industry. Health Insurance providers such as Laya have invested heavily in support services including digital doctor consultations and bespoke clinics, building deep customer relationships. Poverty, unemployment and wealth inequality was the next issue most concerning Irish citizens. According to Social Justice Ireland there were 689,000 people living in poverty in Ireland at the end of 2019. Even though the unemployment levels were at their lowest since 2008 at the beginning of this year, unemployment was still seen as a key issue, as was wealth inequality.

Climate change became more centre stage as an issue during 2019 and this was set to continue into 2020 and beyond. To what extent this stays on the agenda during and post the Covid19 pandemic is difficult to predict. The two scenarios are that with the economic pressures and safety focus, environmental issues may fall down the list of factors influencing consumers. The alternative is that the stark impact of the lockdown on the planet as we lessened the human footprint, may bring into focus the importance of continuing to protect the environment and it may continue to be a key motivational lever for brands to be aware of. 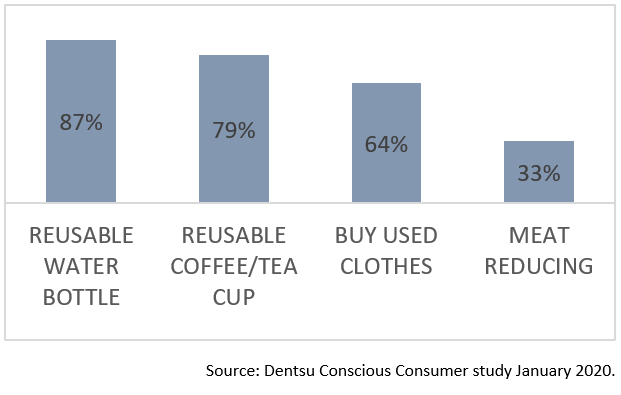 A real change in behaviour

Our research showed that 33% of 15-64 year olds are actively reducing their meat consumption, 87% use a reusable water bottle and 79% a reusable coffee or tea cup. Just over half of us wash out and recycle household items, showing a real change in behaviour linked to the environmental concern and how it is influencing how we make decisions in what to buy.

Income inequality in general and market inequality in particular, have been controversial subjects and “the squeezed middle” has been hotly debated over the last few years during the recovery. This research did not set out to prove or disprove inequality or distribution of wealth, but a very clear trend emerged in the data. The age demographic of 45-54 consistently behaved differently to other age groups. The 45-54-year olds in Ireland are most likely to be value conscious and least likely to be socially conscious and were most likely to feel disappointed that the 2020 budget did not include any changes to tax rates and bands. This group also were amongst the heaviest drinkers and smokers in Ireland and the least likely to exercise regularly.

There are of course many explanations as to why this particular age profile feels most under pressure, but it could be argued that these are the people most impacted in the long term from the 2008 recession. This group would have been 35-44 during the recession and therefore highly likely to have been newest homeowners with the greatest burden of negative equity. Their lifestage would have them supporting new families with high household costs, while still establishing careers during the toughest recession years.
A paper published in The European Journal of Health Economics in December 2018; The Great Recession, financial strain and self-assessed health in Ireland, found adverse effects of unemployment, income shocks and poor living conditions have a significant impact on health and suggest that a health crisis may follow economic crisis in the medium and long run. While many pathways that link economic crisis to changes in health have been proposed, the relative contributions of different factors are largely unknown.

As we start thinking about the Covid19 impact, mental health is has already been identified as a massive threat in the short term, but the longer term footprint of Covid19 may still be felt by key demographics well into the 2030’s and 2040’s. Marketers trying to understand the delicate balance of message and context in the midst of the crisis need to ensure that this level of interrogation and insight is not lost as we move into the exit stages and beyond.

New technology has narrowed the space between offline and online worlds dramatically over the last few years, but the last few weeks of isolation have truly brought into the spotlight the reality of living life through digital platforms. The speed and comfort with which we have all embraced this new digital reality has been extraordinary and our trust of the platforms has not been an issue.

TikTok is exploding and Zoom is now part of our everyday lives from quizzes to family get togethers. Our research showed that 17% of Irish consumers were active users of TikTok prior to the pandemic lockdown and usage will likely be significantly higher after this period.

The appearance of Travis Scott in Fortnight on Thursday, 23rd April was another demonstration of our virtual normalisation. While this was not a first, it did demonstrate the ability for entertainment to move to a digital format quite seamlessly. In February last year while the Maroon 5 singer Adam Levine was courting controversy for his Superbowl halftime show, video game fans were revelling in the afterglow of a different live performance.

eSports is one of the fastest growing sectors globally, demonstrating massive growth since 2016. According to Newzoo’s esports market report, by 2021, the global annual growth rate will be approximately 14%. They also predict that the number of casual viewers will grow to 307 million. And that there will be 250 million eSports enthusiasts, making the total audience 557 million.

Our research showed that prior to lockdown 22% of consumers were watching eSports and 18% playing. The void that “real” sporting event cancellations has created during Covid19 will almost certainly be filled to some extent by eSports, seeing an even bigger bump in growth. Those watching eSports are highly engaged and connected to the players and the game tactics, providing marketers with great engagement opportunities.

This merging of real-world experience and digital experience is starkly represented when considering that the same percentage of people trust the government as they do their virtual home assistants (Google home, Amazon Echo).

Understanding the changes and adjustments in Irish consumers, whether from the long-term impact of the 2008 recession or changing eating habits due to environmental concerns means that how we contextually position our brands is a crucial consideration for communications success. The way consumers are consuming their information has also changed dramatically and 76% believe that fake news is a problem, but only just over half regularly check if the content that they are consuming is accurate. Most feel that the publisher of the content are responsible for accuracy of what they are publishing but 56% feel that Facebook is responsible, 30% believe it is Google who shoulders the responsibility and 19% the Irish Government.

As we consider the reality of emerging from the Covid19 pandemic, economic recovery and value will dominate consumers decisions. The world that we exit into is completely unknown and societies and governments are having to consider the worse of two evils – devastation through the health impact of the pandemic or devastation through the economic impact. Some form of gradual exiting will begin across the globe over the next few weeks and being contextually aware of where and how we place our brands will never be more important. It would be remiss to only consider data and learnings within the lockdown timeframe. There is an opportunity to understand the influences on purchasing behaviour as we headed into the crisis, what we know during the crisis and learning from history to help inform the post crisis reality.