There was greater diversity and interest in the news stories which received coverage in the month of June. As Ireland began to re-open, there were also significant political, economic and social issues which people were engaging with.

The news story which has the highest Cultural Index Score, because it was the most important to the public, was the tragic killing of Detective Garda Colm Horkan in Castlerea, Co. Roscommon. The outpouring of sympathy across the nation was evidence that this sad event would strongly resonate with people across the country. 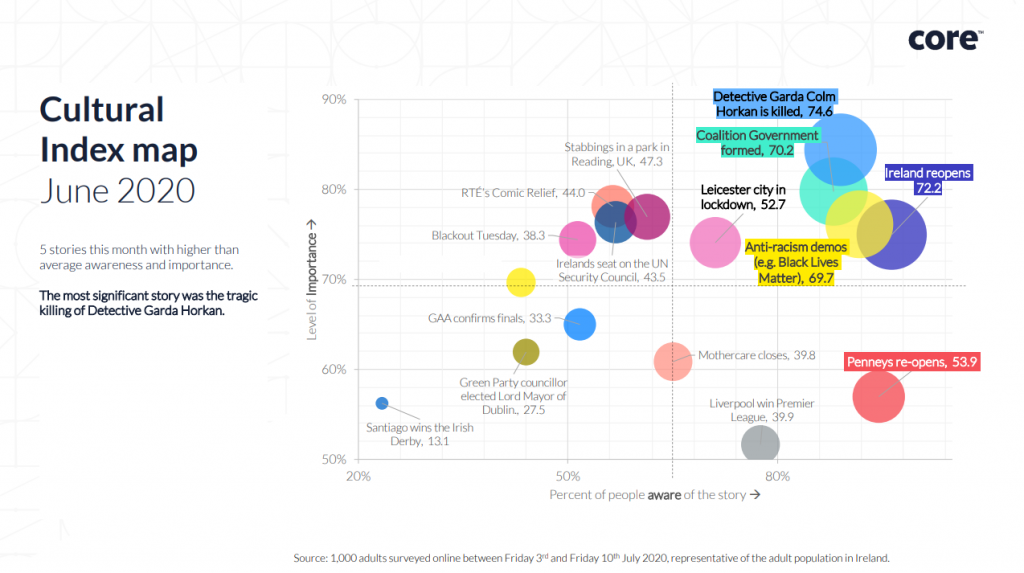 The re-opening of pubs, hairdressers and hotels was the second highest story to resonate with people. Unsurprisingly 96% of people were aware of these re-openings, and 66% of people said it was a significant moment. Similarly, the same number of people believed the formation of a Government coalition was an important event in June. However, the Government formation was not viewed positively by all. Sentiment analysis shows that the majority of those aged over 40 years old feel positive towards the Government formation. However, the majority of those aged under 40 feel negative towards the coalition. Despite strong Government approval throughout COVID-19, a young generation will need convincing that this Government will address their concerns.

The fourth most significant news story for people living in Ireland were the anti-racism demonstrations (i.e. Black Lives Matter). 92% of people were aware of these events and in particular, young adults (aged under 30) believed this activism was an important moment. 71% of young adults said this was an important news story to them, and 70% said they were positive about the demonstrations demanding societal change.

As people slowly return to a life beyond their homes, they are also engaging with news beyond COVID-19. The Cultural Index provides us with important insight into what matters to people. As we approach over 1,000 news stories analysed since 2015, this latest month reveals further political, economic and societal stories which will shape Irish culture in the months and years to come.

The Cultural Index is developed from a survey of 1,000 people, representative of the Irish adult population. Fieldwork was from Friday 3rd July to Thursday 9th July and was conducted online.