Following an encouraging year of recovery for sponsorship investment in Ireland, estimated to reach €182 million by the end of 2021, ONSIDE and the Marketing Institute of Ireland are once again joining forces to host the sixth instalment of the “Who Won Sponsorship Series” on Thursday, 21st October 2021.

The ONSIDE and Marketing Institute of Ireland virtual event includes a sponsorship focused review of this summer’s major occasions including the UEFA Euros, the Olympics and Paralympic Games, with learnings from key stakeholders including Peter Sherrard, CEO of the Olympic Federation of Ireland, John Seiler, Head of Sports & Gaming, Europe at The Coca-Cola Company and Declan McBennett, Head of Sport at RTE.

Paul Dermody, CEO HRI Racecourses & Marketing and Jo Harrington, Head of Marketing Partnerships, Live Nation Ireland and Pasi Lankinen, previous partnerships strategist for FC Barcelona and current advisor to Manchester City will share their perspectives on the changing landscape and future of the sponsor / rights holder relationship, how they anticipate flexing to meet the altered expectations of fans to enhance engagement, and what the future of live events might look like in the post-Covid world.

The San Francisco 49ers Chief Revenue Officer Brent Schoeb will share insights from the US on the impact of last year’s restrictions on revenue and how they are bouncing back. This session will look at impact on areas such as partnerships contracts, diversification of revenue streams, the cryptocurrency trend in sport circles and how the 49ers have upped their game in capturing fan and other data and putting the insights derived from that data to good use, especially to improve the fan experience at Levi’s Stadium.

An all-star panel of leading Talent in Ireland including Tokyo 2020 Olympic and Paralympic Gold medal winners Kellie Harrington and Ellen Keane will also discuss how their achievements and how star power can make a meaningful difference to their communities and the Irish marketing industry.

See the great speaker line-up below. 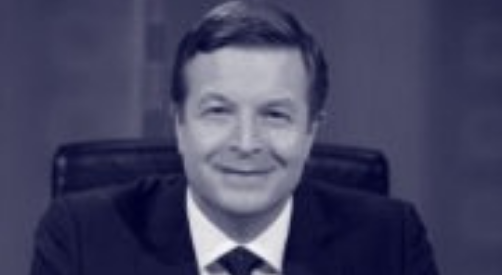 Darragh Maloney works as a presenter and commentator with RTÉ Sport.

He has been with RTÉ since 1995 and has presented and commentated on six FIFA World Cups and UEFA European Championships. He has worked as a presenter for the television coverage of the last six Olympic Games and has been RTÉ Radio Commentator on the All-Ireland Football Final since 2011. 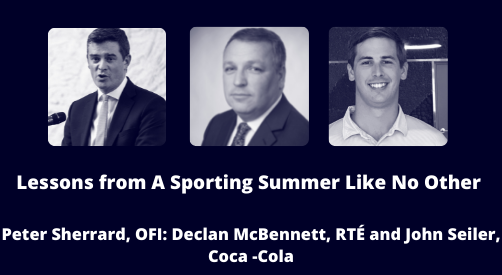 Panel: Lessons from A Sporting Summer Like No Other

Peter Sherrard has been Chief Executive of the Olympic Federation of Ireland since 2018. During that time, he has overseen a re-brand, the introduction of new sponsors, a trebling in staff numbers and the launch of Team Ireland’s sport science partnership agreement with the Sport Ireland Institute for the Tokyo Games cycle.

He had previous experience at director level in international commerce, tourism, aviation and sport, in roles covering commercial / marketing, sales, communications, operations and sponsorship with Bord Bia, Tourism Ireland, Ryanair and the FAI. Peter has fluent French and Italian and sits on the Sport Ireland High Performance Committee.

Declan McBennett is the Group Head of Sport with RTÉ and is responsible for all sports content across television, radio, online and digital.He has held the position for just over three years now and has been with RTÉ for over 21 years. In his role he is charged with the rights negotiations for the national broadcaster and managing the relationships with the sporting associations and federations as well as individual rights holders. This summer saw the channel produce coverage of the delayed EURO 2020 tournament, the Olympics and Paralympics from Japan as well as the GAA Championship. He also oversaw the return of provincial rugby to RTÉ television via the United Rugby Championship while next year will also see the return of the Six Nations to RTÉ. Declan has also overseen the increased focus on women’s sport reflected across all platforms within RTÉ.

John Seiler joined The Coca-Cola Company in the summer of 2018. John is the head of the Europe Sports & Gaming Asset team within Integrated Marketing Experience. John leads Coca-Cola’s sports & gaming marketing partnerships and develops activation programs in coordination with cross-functional teams spanning the company & bottler network. John and his team are responsible for developing innovative marketing programs and collaborating with customers, regions and the system to ensure that Coca-Cola’s sports & gaming marketing asset strategies break through and create value in-venue and with consumers. In his previous role John led Pro Sports marketing for the North America Operating Unit, based out of Atlanta. 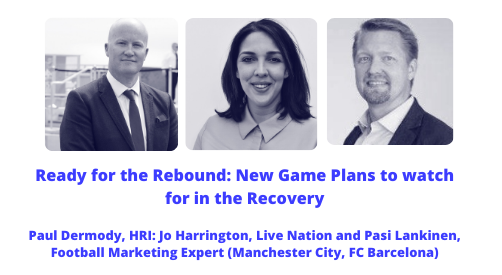 Panel: Ready for the Rebound: New Game Plans to watch for in the Recovery

Paul Dermody is both the Commercial Director for Horse Racing Ireland (HRI) and the CEO of the HRI Racecourses Ltd subsidiary (comprising Leopardstown, Fairyhouse, Navan & Tipperary Racecourses). He is also a director at the Curragh Racecourse and the Louth Meath Education & Training Board. Paul is an experienced sports business professional having held senior commercial & marketing roles in three of Ireland’s biggest sports organizations – the GAA, Leinster Rugby and Horse Racing Ireland. Passionate about sport sponsorship and maximizing return on investment for sponsors and rights-holders alike, he has negotiated and managed some of the biggest sponsorship properties in the Irish market in recent years.

Pasi Lankinen is a former senior marketing executive at both City Football Group and FC Barcelona and as the Managing Director of Lanexco Oy continues to serve as an advisor to City Football Marketing. Pasi’s sports business career spans nearly two decades, covering all business areas of a sports property, across multiple touchpoints with leagues, brands, agencies and systems providers. In 2003, he joined FC Barcelona, where over 12 years he worked across most of the business verticals of the club, managing the club membership programme initially, later as Head of Marketing and Business Development, including fan engagement and initial digital strategy, and finally as Head of Business Intelligence, providing strategic guidance to all business areas in the club.

In 2015, Pasi moved to City Football Group and London, where he took the role of VP Director of Partnerships Strategy & Operations, leading a team dedicated to support the sponsorship sales and activation efforts primarily for Manchester City, but also helping drive the business of the increasing number of clubs in the group. Since moving back to his native Finland in mid-2021, he continues to support the City Football Marketing Group as Senior Business Advisor, while developing a sports business consultancy. He is also a non-executive board member of HJK, the most successful Finnish football club and Finnish League and Finnish League and Cup champions of 2020. 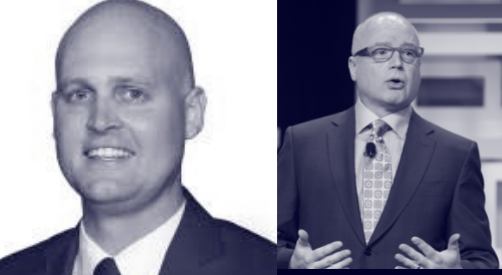 Brent is in his 11th season with the San Francisco 49ers and fourth as chief revenue officer. In his role, Schoeb is charged with overseeing corporate partnership sales, corporate partnership activation, broadcast partnerships, suite/premium sales, suite/premium activation, membership sales, membership services and ticketing for the 49ers. He also oversees public and special events at Levi’s® Stadium, which was voted the Sports Business Journal’s Sports Facility of the Year in 2015. Across each of Schoeb’s revenue generation verticals, the 49ers rank as a top NFL team and in turn are one of the world’s most valuable sports franchises according to Forbes.

Previously, Schoeb served as the 49ers Vice President of Corporate Partnerships. The 49ers have more million dollar corporate partnerships than any other NFL team and partner with some of the most recognizable brands in the world.

A Minnesota native, Schoeb is a graduate of St. Cloud State University and later completed his MBA and Masters of Sports Administration at Ohio University. Schoeb serves as a National Sports Forum and NFL Club Sponsorship steering committee member. Schoeb has won several awards over the years including Sports Business Journal Forty Under 40, Leaders Under 40 and Silicon Valley Business Journal 40 under 40.

Jim Andrews supports the ONSIDE consulting team as Strategic Consultant in Chicago and brings 30 plus years of international experience to ONSIDE’s work as an acknowledged expert in the fields of sponsorship, events and sports marketing. Previously, Jim was instrumental in building pioneering sponsorship firm IEG into a global leader in industry data, information and consulting, working on some of North America’s and the world’s largest sponsorship deals of the past 3 decades.

He was a founding member of the advisory board for the Center for Sports Sponsorship & Sales of the Hankamer School of Business at Baylor University and is an adjunct lecturer in Northwestern University’s Master’s in Sports Administration program, where he teaches a course in sports sponsorship. 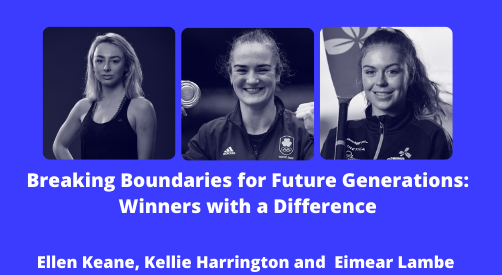 Panel: Breaking Boundaries for Future Generations: Winners with a Difference

Ellen Keane is a four-time Paralympian. The 26-year-old claimed gold in the SB8 100m breaststroke in the 2020 Tokyo Paralympic Games, swimming a personal best. This performance improved on the bronze medal she won at the 2016 Rio Paralympic Games. She became Ireland’s youngest Paralympic athlete at 13 when she competed in the 2008 Beijing Paralympic Games. The Dublin woman is also a multiple World & European Medallist Para-Swimming medallist. Continues to have a strong voice, advocating for greater visibility and understanding of those with disabilities and Paralympians.

Kellie Harrington is an Irish amateur boxer, and current Olympic champion Kellie Harrington, from Dublin’s North inner city boxing out of St Marys boxing club in Tallaght. Kellie has won World championship Gold and silver medals as well as European silver and bronze in the past five years and is regarded as one of the best female amateur boxers in the world. Kellie balances working in St Vincent’s Hospital and is very active in the promotion of her community, women in sport and physical activity with both Sport Ireland and Dublin City Council.

Eimear Lambe made history when she won a Bronze Medal in rowing at the 2020 Tokyo Olympics in the Women’s Four (W4) alongside Aifric Keogh, Fiona Murtagh and Emily Hegarty. They were the first Irish female rowers to secure Olympic medals and they were only the second ever female crew to compete in an Olympic final. Eimear started rowing in 2012 at Commercial Rowing Club in Dublin. She first competed internationally at the Coupe de la Jeunesse in 2013 and raced at the Youth Olympics in the same year. Eimear studied International Commerce and German at UCD and is currently working in a graduate program in Business Consultancy with EY. She likes to keep up to speed with current affairs, enjoys hiking and is a supporter of Sanctuary runners. This aligns with her view on the power of sport to bring people together as well as build character and support positive mental wellness. 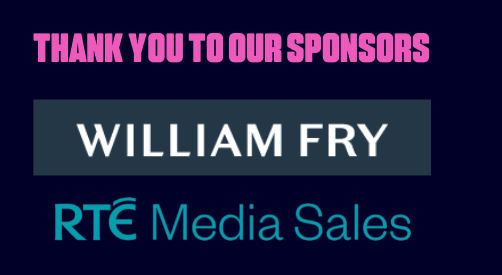 Thank you to our sponsors – whose support has made this event possible.
Register