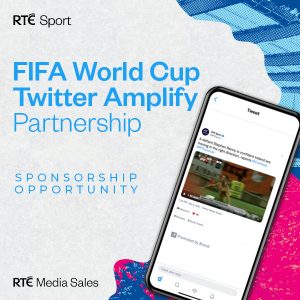 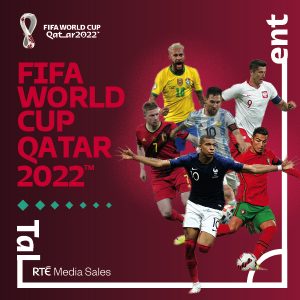 RTÉ and Twitter have today announced a new content partnership in Ireland, which will bring clips and highlights from the FIFA World Cup Qatar 2022™ to the platform, amplifying the event’s digital coverage to Irish football fans.

Twitter is where football fans go to stay close to the action, and this is an opportunity for brands to place themselves at the heart of the World Cup conversation in Ireland. Throughout the tournament (November 21 – December 18) the partnership will bring 250 near-live highlights, pre-match build-up clips, and post-match analyses and moments from the RTÉ studio straight to the platform.

Through Twitter Amplify, advertisers will be able to align their ads with premium video content and utilise the most engaging moments from the FIFA World Cup Qatar 2022™, posted directly from @RTESport, enabling them to run branded pre-roll video during the world’s biggest sporting tournament.

Geraldine O’Leary, Commercial Director, RTÉ said “At RTÉ Commercial we continually strive to offer new, unique opportunities to our advertisers that deliver impact and cut-through. We are therefore delighted to announce our partnership with Twitter Amplify, just as excitement for one of the world’s biggest sporting tournaments starts to build. The FIFA World Cup Qatar 2022™ will no doubt be one of the television highlights of the year, and we are excited that advertisers will be able to leverage the online conversation around this huge event. The combination of expert coverage and analysis from the RTÉ Sport team and Twitter’s advanced targeting tools, will allow advertisers to reach and engage sports fans on an even greater scale than ever before.

“Both Twitter and RTÉ are at the heart of so many football conversations across the country, so being able to bring moments from the biggest international sporting event to users on an even greater scale is incredibly exciting.” said Theo Luke, Senior Director, Global Content Partnerships at Twitter. “This is our first official partnership with Ireland’s national broadcaster and when it comes to sports coverage, we’ve always been impressed with the creativity of their editorial teams, the breadth of coverage dedicated to international football tournaments as well as the high calibre punditry on display. We’re really excited and looking forward to establishing a strong rapport with their commercial and sales teams. Through Twitter Amplify, advertisers will have even more opportunities to engage with the FIFA World Cup Qatar 2022™ in even more impactful ways.”