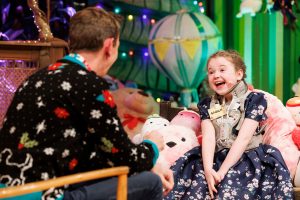 It was a weekend of entertainment on RTÉ that proved to be a big hit for all the family, with the Late Late Toy Show consolidating it’s position as the most-watched programme on Irish television. The Toy Show Appeal to date has raised €3.8 million for Irish charities, bringing the total to a staggering €17 million since its inception in 2020. Interestingly, the RTÉ Player recorded its highest-ever weekly number of streams at an incredible 5.3 million while the data also shows that 53% of World Cup live streams on RTÉ Player have been on smartphones.

The Late Late Toy Show had 303,000 streams on RTÉ Player across the weekend, with viewers watching from over 139 countries including Bolivia, Jamaica, Qatar, and Ukraine. Áron Gibbons, Cealan Green, and Emmie’s stand-up comedy routine were among the most-streamed clips on RTÉ Player. The global Irish joined Ryan to stream the uniquely Irish Toy Show, with 22% of live streams coming from outside Ireland.

Average TV viewing for Friday night’s show is now over 1.6 million, including catch-up viewing on Saturday and Sunday. An average audience of 1.33 million viewers tuned in live to RTÉ One on Friday night. An additional 296,000 watched the programme on catch-up TV, including RTÉ One +1 and the Sunday repeat.

Host of The Late Late Show, Ryan Tubridy, said: “Friday night was a joy to be part of and that is exactly what I was, I was part of a big Toy Show family gathering. That is to say, people working behind the scenes and the children who participated. The reaction has been very gratifying and very heartening. I just got the sense that people wanted a night off from reality, they wanted a night to smile, laugh and cry together. People of all ages got something from this bizarre, beautiful show so I really want to say thank you to everyone for putting it together, for being part of it, and for watching it. Happy Christmas to one and all.”

Across the last 7 days, the #LateLateToyShow garnered an incredible 39.2 million views on TikTok as the nation geared up for and enjoyed the show on Friday night. RTÉ’s own social accounts generated 8.3 million video views across TikTok, Instagram, Facebook and Twitter with the hashtag trending on Friday night and over the weekend on TikTok and Twitter.

Aoife Byrne, RTÉ Head of RTÉ Player, said: “It has been an extraordinary week for RTÉ Player with over double the streaming volumes of our previous weekly record.  In 2023, we’ll be looking to build on these successes to make RTÉ Player a must-visit streaming destination in its own right for Irish audiences. We will be expanding our distribution, continuously improving the user experience, adding new features and functionality and growing our catalogue of quality Irish and international boxsets.”

Jim Jennings, RTÉ Director of Content, said: “RTÉ exists to serve audiences content that informs, engages, and entertains. It is great to see audiences engage in such large numbers with a diverse range of content, from the Toy Show’s uniquely Irish heart-warming moments to the thrilling sporting action of the World Cup. Our shared stories are what makes us unique and RTÉ is proud to share those stories and moments with the Irish public.”

Sign Up Now to be the first to receive the latest marketing news, upcoming events and courses, job openings, and more straight into your inbox.