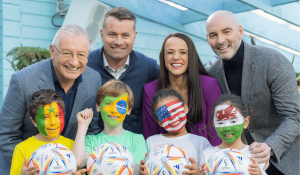 After a thrilling 64 games, it came down to one of the most exciting world cup finals in living memory as Argentina and France battled it right out to the bitter end in a penalty shootout which resulted in the world’s greatest player winning the ultimate prize and lifting the World Cup trophy. RTÉ provided live coverage of all 64 games across RTÉ2, RTÉ Player and RTÉ News Channel to Irish audiences over the past month. Yesterday’s World Cup Final saw record numbers of 780,000 (59% share) on RTÉ2 and also 478,000 live streams on RTÉ Player. The final peaked at 17.54 when 1.030M viewers sat on the edge of their seat as Messi went up against Mbappe in a nail-biting penalty shootout.

The road to the final saw huge audiences as

– 784,000 watched Argentina’s semi-final victory over Croatia, the most-watched match on RTÉ2.
– England v France was in third overall place with a 760,000 average audience.
– France v Morocco was the fourth biggest match on RTÉ2 scoring 632,000 viewing average.
– There were also 8.5 million total streams recorded across the tournament. The Final had 478k live streams.

Group Head of RTÉ Sport, Declan McBennett, said: “The “Messi Mbappe” World Cup brought about audience engagement at unprecedented levels and is a tribute to the professionalism of those involved from presenters, pundits and production teams.”

Head of RTÉ Player, Aoife Byrne, said: “We are thrilled with the performance of the FIFA World Cup on RTÉ Player. Our focus over the past two years has been on investing in and improving the reliability and resilience of RTÉ Player and particularly our ability to scale to meet the rapidly increasing audiences we’re seeing, both live and on-demand. The user experience achieved during the World Cup where RTÉ Player delivered its highest concurrent audience ever demonstrates the effectiveness of these works.”
RTÉ coverage of the FIFA World Cup 2022™ was sponsored by Hyundai and KFC. All above TV figures are based on Inds 4+, Live+VOSDAL.

Sign Up Now to be the first to receive the latest marketing news, upcoming events and courses, job openings, and more straight into your inbox.