The Consumer Market Monitor is a publication provided by the Marketing Institute of Ireland in collaboration with the UCD Michael Smurfit Graduate Business School.

It is designed to track key indicators of confidence and activity in the Irish consumer market as a resource for marketers and the wider business community. The consumer market accounts for over 50% of GNP so it is an important indicator of the health of the economy.

It relies on a model of consumer behaviour which sees economic variables such as income levels, taxes, interest rates and exchange rates influencing consumer confidence which, in turn, influences consumer behaviour including spending, saving and borrowing.

It is based on data from the Central Statistics Office (CSO), the Central Bank, the European Commission, and other secondary sources. The added value rests in the fact that the information is brought together in a single location and presented in a way that is easy to use for market analysis and sales planning. The accompanying editorial also highlights important trends and linkages that point to emerging opportunities and threats.

It is published on the Marketing Institute website and the UCD Smurfit School website and is updated every quarter. This edition covers Q4 of 2019 and reviews the year.

Download the latest issue of the Consumer Market Monitor

Dublin, February 19, 2020: The latest Consumer Market Monitor (CMM), published today by the Marketing Institute of Ireland and UCD Michael Smurfit Graduate Business School shows that the Irish consumer economy has remained strong over the past three years despite a faltering in confidence due to widespread worries about a negative fallout from Brexit. In fact, a review of the last decade paints a very positive picture in which most measures of wealth and well-being are back to where they were at the last peak in 2007, according to Marketing Professor Mary Lambkin of UCD Michael Smurfit Graduate Business School, author of the report.

“More people at work, rising wages and the increasing value of homes are all contributing to the improvement of household finances, with the perception of increasing wealth leading to more spending,” said Tom Trainor, Chief Executive of the Marketing Institute of Ireland.

The Irish economy is continuing to grow strongly, with consumer spending providing the main stimulus together with property investment. Household spending grew by 3.4% in 2018 and by 3.3% in 2019, to a total of €108 billion, a strong performance that exceeded estimates.

Consumer demand is expected to remain strong this year and next year, driven by continuing growth in employment and incomes, but also helped by the removal of uncertainty in relation to Brexit.

Consumer spending has also been boosted by improving household finances, mainly as a result of the increasing value of peoples’ homes. Household wealth stood at €800 billion in September 2019, equivalent to €470,000 per household or €163,000 per person. This is up 80% from the lowest point in 2012. Perceptions of increasing wealth build confidence and encourage consumers to release some of that wealth for spending.

Irish consumers are also beginning to supplement their incomes by taking on some debt, mainly to support the purchase and furnishing of homes. Following a decade of deleveraging with repayments exceeding new borrowing every year, borrowing is beginning to increase again at a modest rate. New lending of €2 billion was advanced to Irish households in 2019, an increase of 2%. €1.2 billion of this was for the purchase of residential property with the balance for other personal consumption.

Credit and borrowing are not major contributors to recent spending, however, unlike in the last boom. The ratio of debt/disposable income of Irish households has continued to fall, down from 215% at the peak in 2012 to 115% in September 2019, a reduction of almost 50%. Also, savings are continuing to increase – bank deposits grew by almost €6 billion (+5.5%) in 2019.

An estimated 57,000 homes were sold in 2019 which was 4% higher than 2018. In contrast, the number of mortgages approved was up 7% in the year indicating that demand is still stronger than supply. 65% of those mortgages went to first time buyers showing that this is still the predominant need.

In contrast, the number of imported used cars has been increasing every year since 2005, with sales of 109,000 in 2019, almost equalling new car sales.

A final point to note is the broad-based deterioration in the UK consumer economy on foot of Brexit. There has been a weakening in virtually every metric tracked in this monitor, from property to cars to retail and services from mid-2016 to the end of 2019. Recent data show that this negative trend may be easing, however, with more clarity around Brexit and a slight lift in the value of Sterling.

Consumer confidence began to recover in 2013 and increased steadily for five years in response to positive economic data. By 2017, confidence among Irish consumers was well ahead of the previous peak in 2007 and was also significantly higher than that of our European neighbours.

Confidence dropped through 2018 reflecting continuing worries about the negative implications of a “hard Brexit”. This downward trend continued through 2019 and, by the end of the year, confidence here was only marginally higher than the UK and the wider EU. Confidence has picked up in January 2020, however, and the picture looks more promising for the rest of this year.

Consumer confidence in the UK has been consistently negative since Q2 2016, reaching a low of -14 in November 2019. It picked up slightly in December (-11), however, and again in January 2020 (-9), suggesting that the tide may be turning now that Brexit has actually happened.

Consumer confidence in the EU has also been relatively weak for several years although slightly stronger than the UK (-8).

The disposable income of Irish households rose by 6% in 2018 to a total of €110 billion, significantly overtaking the last peak of €101 billion in 2007. Increasing numbers in employment together with pay increases drove this growth.

Disposable income grew by a further 6% in 2019 reaching an estimated €117 billion for the year as a whole and the momentum is continuing this year, although perhaps at a slowing rate.

Borrowing by Irish households grew at a record level from 2000 onwards and peaked in 2008 at €150 billion. It then declined steadily — down 40% by December 2016 to €88 billion. This downward trend levelled off in 2017, after almost a decade, the first sign of a return to normal conditions. Household debt increased by 2% per annum in the last two years and stood at €92 billion in December 2019.

The indebtedness of Irish households is continuing to reduce; the ratio of debt/disposable income of Irish households has fallen from 215% in 2012 to 115% in September 2019, a reduction of almost 50%. Household deposits also have continued to grow, up by €6 billion or 5.5% in 2019.

There were 32,835 mortgages drawn down in 2019 which was 7% higher than the 30,630 in the previous year. 65% of those mortgages went to first time buyers demonstrating that this is still the predominant need.

The services sector recovered more quickly from the recession than the retail sector, showing modest growth from 2011 onwards, and recovering more rapidly in recent years. The index overtook the 2007 peak in 2014, and made further gains in 2015, 2016, and 2017, up by 4+% per annum.

The fortunes of individual service sectors have varied widely, however, information/communication services did best, up by an astonishing 28% in 2019. Other services were up by 12%, and accommodation and food service were also strong, up 3% and 9% respectively in 2019.

Following the recession, sales of new cars began to recover in 2014, and grew substantially in 2015 and 2016, to 143,000 units. This positive trend was short lived, however, reversing steadily since then.

In contrast, there has been a substantial increase in the number of imported used cars every year since 2005, with sales of 109,000 in 2019 almost equalling new car sales.

Online sales represented just 3.3% of total sales for traditional (bricks and mortar) retailers operating in Ireland, although it was higher in some categories such as books (13.5%). This does not include online retail sales going to exclusively digital retailers (e.g. Amazon) which amounted to about 11% of total retail sales.

Household equipment continued to be the fastest growing category this year, up by 11% in volume and 4% in value in Q4, year-on-year. Sub-categories within that — electrical goods and furnishings — did exceptionally well, up by 12% and 7% respectively.

Supermarkets and other food stores also performed well, as did pharmaceuticals and cosmetics. Department stores and newsagents were the weakest categories in Q4, down by -2.7% and -4.5% in volume respectively.

In 1964, University College Dublin became one of the first universities in Europe to offer the degree of Master of Business Administration (MBA).  In 1991, the graduate business school opened its own campus in Blackrock, County Dublin.  With over 100 faculty members, 1,300 students and 75,000 alumni worldwide, UCD Smurfit School is one of a small number of business schools worldwide and the only school in Ireland, to hold triple international accreditation (US – AACSB, European – EQUIS and UK – AMBA). The school’s programmes have been consistently ranked among the leading European business schools’ programmes by the Economist and Financial Times, since 2000.

The School is also a member of CEMS and the Global Network for Advanced Management, which are alliances of leading global business schools.

About the Marketing Institute of Ireland

The Marketing Institute is the professional body for Ireland’s marketing people. It exists “to enable marketers to build great brands and great careers”. It does this by sharing best practice, insights and expert content, building the community of marketers, and aiding marketers in career progression. The three themes of content, community and career underpin all Institute activities. The Marketing Institute also owns and operates the All Ireland Marketing Awards, the CMO Summit, and DMX Dublin, Ireland’s largest marketing conference. 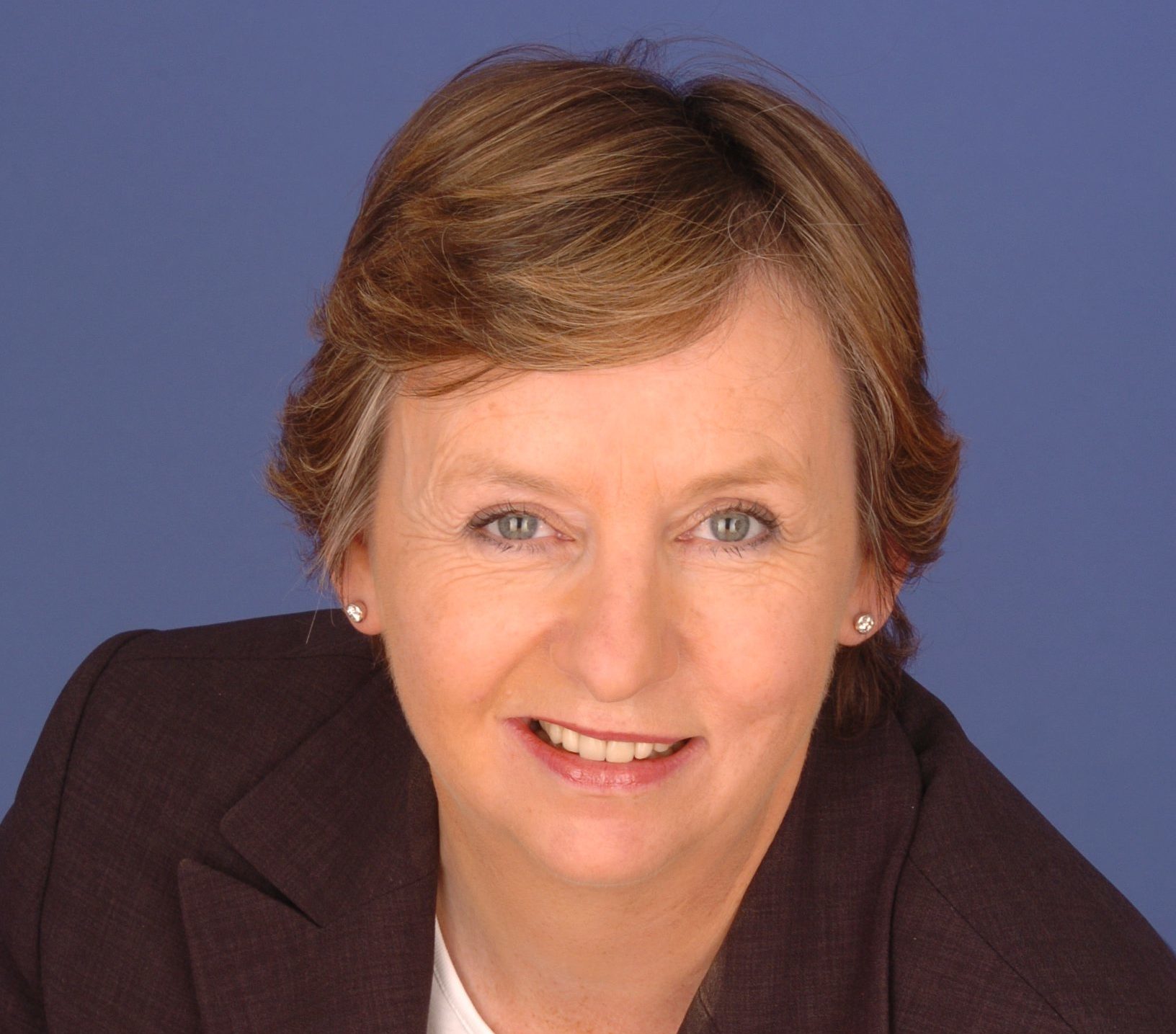 Mary Lambkin is Professor of Marketing at the Smurfit Graduate Business School, University College Dublin. She has served as Dean of the school and has sat on the Governing Authority of the university. She completed her PhD at the University of Toronto following an MBA from UCD, and she continues to publish widely on strategy and marketing topics.

She also has considerable industry experience, commencing her career at Unilever, and continuing to be involved in consulting with a wide range of companies. She is also an experienced corporate director, currently serving as Chairman of Barclaycard International Payments Ltd., part of Barclays Group. Previously, she has served as an independent non-executive director of Citibank Europe plc, Barclays Insurance Dublin Ltd., Irish Shell Ltd., as well as several professional and government organisations.